“Admissions approves you before you apply. So on the student end, your application process is the same as everyone 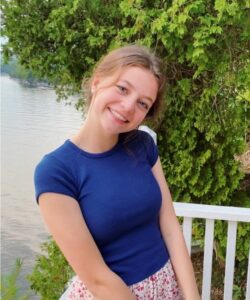 else’s, but on the actual college end, it’s different because your application, your name, is flagged before you even submit it,” said Julia Fullington, a recruited rower from Connecticut headed to University of California Berkeley this fall.

I made a list of things that were important to me. There were things like: How good is their team athletically? How good is the school academically? Location? Do I like the coaches? Do I like the team? But at first, they were more general things, like, “I don’t want to go to school in the South,” so I cut out all the schools in the South. But you have to start with your net pretty wide because you have no idea where you really have a chance.

From the beginning, I knew that I was interested in schools in California and the Northeast, which is random because they’re opposites. And I knew I was interested in Cal because Cal has an incredible rowing team and academics, of course. But you just want to start with as many options as you like, and then you should really wait to narrow your options down until you’re sure you can narrow. If you’ve boxed yourself in to just the Ivies or just a certain type of school, you might be losing opportunities at other places.

Probably 30-35, something like that. It might be different in other sports. I know in football and lacrosse, there’s a scouting process where coaches will come to teams they know are good, or athletes will go to showcases to get noticed by coaches.

But we don’t have anything like that in rowing, so it’s up to the athlete to reach out to coaches and to spark the conversation.

I wrote an email; it took me a week to write. I wrote out the best email I could think of, and I sent it to every coach on the list. And I obviously changed it up in between a little bit, but I just wanted to give coaches basic information about me and see what they thought. And some of them never reached back out to me, which took them off the list. And then some of them did and wanted to set up phone calls.

And then coming from there, I had calls with probably 15 coaches or something like that. Sometimes I would have a conversation where I was like, “I don’t know if that school is the right place for me based on what they said about the team or the level of competition or just about their coaching style.” And from there, I was able to narrow down my options even more.

Misconceptions of being recruited as a college athlete

I think to be recruited, you have to be in the range of what that school you’re talking to expects from their normal applicants. So, say this random school usually looks for a 3.5 GPA or something; that’s the average GPA of their admits. Recruits could probably have a 3.4, maybe a 3.3 or something.

If test centers reopen, should I take the SAT or ACT?
"Leave them alone to make their own life decisions," ex-Berkeley admissions dean advises parents
The Inner Workings of UC Admissions, Part 1