“Don’t compare your child to siblings, don’t compare them to other kids, don’t compare them to yourself. As a working parent, you don’t have a lot of time with your child anyway… That’s the most certain way to erode the time that you do have and to have your teen ignoring you and pulling away from you,” says Daisy Dowling, author of Workparent: The Complete Guide to Succeeding on the Job, Staying True to Yourself, and Raising Happy Kids. This week, the Founder & CEO of Workparent and Harvard Business School alumna shares: 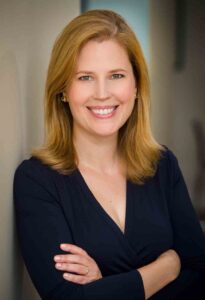 Thank you so much for joining us, Daisy! Our readers are parents of college hopefuls. How can parents be most helpful to their children who aspire to go to college one day?

There are actually two things that I’m thinking about. One is helping my kids get the self-management routine and also the self-management tools that I think will help them flourish on the road to college, and then in college. So not even so much the right answer to the math problem, but the habit of sitting down every day after school to work on the math homework with that problem. And doing things like keeping track of time, keeping checklists for themselves, staying organized, even things just as basic as putting things in folders that need to be done versus things that have already been turned in. So that’s the first thing: beginning that scaffolding early.

And then the second thing is to actually talk to your kids about college before you think they’re ready. It sounds strange to talk to my then-five-year-old daughter, for example — this was a couple years ago about college — because it’s so far off. If you begin to get kids excited, then they see what they’re doing in school as a means to an end; there’s a motivational outcome.

What have you seen parents do to get their 5-year-olds excited about college?

Just to give a very specific example, I have a daughter whose first name begins with an M. She asked me what colleges start with the letter M. I said, “Well, Middlebury or MIT.” She said she wanted to learn Japanese. And she said to me, “Mom, do they teach Japanese at MIT and at Middlebury?” And I thought, all I’ve done is sort of jokingly talk about college with her, but she’s already doing curriculum planning. So I think stoking that excitement early without going overboard — it’s very gentle and very light touch — and then getting the organizational and self-management tools in place, I think those two things are doable, and they can be fun with your child.

I am an executive coach by trade. I worked in large organizations where people were hardworking, committed, smart. I could give them advice on managing teams, or showing up in a meeting or delegating, or any of that stuff. But I couldn’t help with what the real issue was for most of them, which was figuring out how to achieve those career goals and perform the way they wanted to at work while simultaneously being terrific parents. And my expertise was in the career part and not in the balance of those two things.

When I became a mom nine years ago, obviously this problem came home from the hospital with me, so what I did was I started speaking to any working parent who would talk to me. I asked them all, “What do you wish you had known? What habits or routines or hacks or ways of approaching all of this have really worked for you? What advice would you give me?” I just left the questions really open-ended, and what I heard back is the basis of my book, but it’s also the basis of my coaching. As working parents, we are the experts. We’re doing this day in, day out, and the more we can talk to each other, the better off we’re all going to be.

Working parents are the most likely to consider outsourcing the college prep process to college consultants or private essay coaches. What should parents consider when debating between helping their kids with college themselves versus hiring a private college counselor?

Those who reported to me that they were okay through the process — that they felt busy and stretched but all right with it — most of them really emphasized to me that they had used their workplace skills to bring to bear on this process. They treated it in a project management-like way. Because we know how to do those things at work, but when we bring them home, sometimes those skills feel a little bit like, “Wait, am I being too much of my work self? Is it okay for me to have a spreadsheet and to-do list when it’s my child that we’re talking about?” But most of them reported really leaning on some of their workplace skills first, and second, putting their child at the center of the action.

Picked for you:  Parents of Teens: The Conversations to Prioritize Before College Apps

The idea of putting a 16-year-old kid fully in the driver’s seat and saying, “Your ball, go ahead, you’re in charge,” feels a little risky, feels a little daunting. Obviously, parents are there to back their kids up. But they did things like ask their kids questions, like, “All right, so what’s your timeline for working on the essays?” as opposed to, “Have you done the essay?” In other words, they didn’t make themselves the constant taskmaster, but they convey that, “Hey, this is your job. You’re in the driver’s seat, in part, because this is where you want to drive to.”

In terms of the consultants, as an executive coach, I can very much relate in terms of coming in as a support, as an outsider who can provide a little bit of extra momentum, leverage, wisdom, experience, etc. And the thing that I would advise parents from that outsider perspective, hired for different reasons, but hired in the same vein, is to be really certain what you’re hiring for.

Are scholarships worth applying for?
College Admissions Mental Health Series: 5 Best Highlights 2021
Want to De-Escalate Conflicts with Your Teen? Try this.