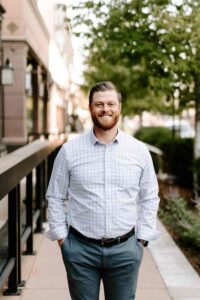 For years, Colorado-based financial advisor Andrew Hathaway would see clients who had screwed up their finances by paying too much for their kids’ college tuition.

“Common things mom and dad would say are: ‘We didn’t realize it was so expensive,’ or ‘We just thought scholarships would be more generous,'” Andrew said. “It was too late…You’ve already dipped into your IRAs, or you took a HELOC on your house.”

Andrew, who’s now a college funding specialist, reminds us that a college degree costs as much as a house except there are no 30-year mortgages for tuition.

In this interview, he shares his best insider advice, including biggest college funding misconceptions, the truth behind 529 plans, and why asking college financial aid counselors for help is like asking the IRS for tax loopholes.

Check out our latest conversation:

What causes parents to get into the financial pickle of paying too much for college?

The last thing parents want to do is tell their son or daughter “No.” At the end of the day, I think a lot of parents are just like, “Well, we’ll just figure it out.” And this is just it’s such a large expense. College is such a unique thing. It costs about the same as as buying a house, but you can’t split it up over a mortgage, like 30 years, like what most people do. But if you actually think about it, putting one, two, or three kids through school could easily cost you between $120,000 to $500,000.

What have you noticed are some of the biggest misconceptions of paying for college?

Just believing scholarships will fall from the sky. Sticker price: looking only at the local school because it’s the “most affordable quote.” I don’t want to beat up on parents that have this philosophy, but I get frustrated when parents are like, “Oh, it’s all on them.” That drives me nuts because at the end of the day, I think you’re absconding or abstaining from responsibility. I do think it’s good at a point to have skin in the game, but basically what you’re saying is your child’s going to come out of college with a mortgage amount of debt. Time is on your side early, so we could have started saving, and any type of saving would have been fine rather than not doing anything at all.

Are there any paying for college tools that are more harmful than helpful?

People don’t know that home equity and things like that can be held against them. Another myth: “College financial aid officers will help me.” That’s one of my favorite ones. I steal this from Andy Lockwood. He’s like, “That’s basically like going to the IRS and asking for tax loopholes; not going to happen.”

Picked for you:  Admissions officers advise future doctors to avoid a nursing degree

One of your training videos talks about the little-known downsides to the common 529 college savings plan that many parents have. Can you explain that a bit?

Well, it’s not the worst thing in the world. When I was cutting my teeth in this industry, I set up 529 plans for clients, because that’s what I was told to do; it’s the status quo. It’s the way that most people do it. There are worse ways that you can shoot yourself in the foot. But 529s are counted as a non-retirement asset, and then when you start taking money out of the vehicle, it is counted as student income or sometimes as untaxed income. For me personally, my philosophy is: If I’m going to save for something, I don’t want to shoot myself in the foot.

What types of people wouldn’t be shooting themselves in the foot with a 529 college plan?

It won’t make a difference for a lot of families who have good incomes. Around $220,000 a year is about where you’re not going to get any need-based financial aid hardly anywhere. But still, you could lose your job or your son or daughter could decide not to go to school. There are a lot of things that could happen where you’re like: “Now what do I do with this 529?”

It sounds a bit limiting.

I just think that the pros don’t outweigh the cons. You pretty much have to use it for higher education. If you don’t, the IRS penalizes you. I think the fund selection depends on the state, but you’re limited there. And then the tax deduction that you get at the state level is just not that big a deal. So we look at alternatives; we just look at other ways to fund it. There’s no silver bullet.

Now that it’s FAFSA season, some parents filling it out aren’t aware of how important the details are. A small typo can delay your financial aid processing for weeks or even months. Can you talk about that a bit?

First and foremost, you can actually transfer a lot of your stuff over from the IRS website. If that doesn’t work, then we’ve actually won appeals in the past where we’ve said, “Hey, the transfer tool didn’t actually work.” They came back and gave us more money or more time. If you log on October 1, you’re going to get pushed back. You might as well just wait a few days.

Picked for you:  Student Playwright Admitted to NYU: Read Her Story

What are some common FAFSA mistakes that people make?

At what point do you reach out to colleges to see how much they might award a family with a particular financial picture?

I’m glad you brought this up. One of the misperceptions that people have is that the college is going to give them financial aid based on their current circumstance. But the base fiscal year is a couple years back. I would say Covid-19 has changed almost everyone’s financial circumstance, so what was on your tax returns two years ago might not reflect what’s going on right now.

Have you seen colleges try to accommodate for the financial changes brought upon by Covid?

In my opinion, I don’t think they give a rip on what’s going on right now. You will have to go back and appeal your financial aid awards if things have changed. Your initial application for aid on the FAFSA and the Profile and whatever else you’re submitting is going to reflect previous financial circumstances with the exception of your current account balances. So you almost do have to go back if your financial circumstances have changed, because it’s just black and white. What’s on the paper — that’s how they’re going to award you on need-based financial aid, and then obviously, merit-based depends on your student.

Can you tell us about any financial aid appeals you’ve successfully managed?

I’ll give you a story of one of the clients that we won an appeal for. He was a consultant who was making very good income, roughly over $300,000. At the point of actually filling out the FAFSA, it was an AGI of almost zero, but guess how they awarded him? Like he was still making $300,000. So we had to go back and appeal the financial aid award to say, “Hey, well, he actually started his own company and his AGI is next to nothing.” That panned out to be some pretty huge financial aid appeals. Typically, when we do appeal, it is a lot of times based on hardship and financial circumstance. It is a bit more rare to win an appeal based on like, “Hey, this student got into three of your other competitors. What can you do for us today?”

In your experience, when a college finds fishy or suspicious information on an applicant’s profile, do they call the parents to double-check the information or do they typically just award the aid based on what was originally submitted?

That would vary. But basically, what we’ve seen historically is that schools will request more information. Any school can do that at any time if they call BS on what they’re seeing.

Picked for you:  Therapist: How To Strengthen Parent-Child Relationship During College Apps

The hardest part is whether or not the parents are working together for the good of the child. Over 50% of our clients have that situation where it can be really nasty, or it can be really like they’re trying to work together. Obviously, on the FAFSA, they only really want one parent’s information, and it behooves you to fill it out, whoever makes less money or has less money. The Profile, that’s not the case. This is weird to say, but if you can have something in writing when you get divorced, it’d be great. But what we find is a handshake agreement.

How does the handshake agreement between the divorced parents help or hurt the child’s college planning?

The handshake looks different for each side of the agreement. One side says, “Yeah, I’ll help.” The other side’s like, “Oh, great, he said he would help.” But what does that mean? So I always ask on the front end of the meetings, if it is a divorce situation, “Is there anything in writing from the divorce decree that there would be some formal funding?” The financial aid thing is easy, because it’s just getting everybody on the same page: Whose name are we filing under? If we do private schools, we need both people’s information. But the hard part, in my opinion, is actually who’s paying for what once we know what the net out-of-pocket costs are.

One reader asked if there’s any way to get a net price calculator that works across all colleges. Most schools post their own online, but it gets tedious inputting numbers into so many different calculators.

There’s software for that. I have a couple: one through my certification, the Certified College Funding Specialist. Another is called My Tuition Score, which our clients get access to. It’s typically based on historical generosities of the school, which is the tricky part. They can decide year over year how they’re going to award.

I had a family one year get really mad at me because we had an estimate of what Purdue was going to do, and all of a sudden, Purdue just totally changed how they awarded stuff. The short answer is there are tools, but your most accurate answer is always from the school’s website.

Sometimes people notice a big difference between the estimate from the net price calculator and their final aid award. What would you say causes these vast differences?

Stay tuned for the reminder of our exclusive insider interview with Andrew Hathaway, College Funding Specialist, next week!

Will certain colleges get my kid a better-paying job?
Insider truth behind scholarships: "Colleges are businesses"
Apply to 100 to win 10, says scholarship insider