“When I walked into my high school, the mascot was the Indians… I committed myself to changing my atmosphere for myself and for other students. Having an Indian as our mascot is racist, because an ethnicity is not a mascot. Starting next year, we’re going to be Bisons instead of Indians, so it’s really powerful to see all of that pay off,” says Hananeel Morinville, a Princeton Prize in Race Relations winner, Coca-Cola Scholar, social justice leader, and one of 6.7% of applicants admitted to Vanderbilt University despite B’s on her transcript and denials from NYU and U Mich. Hananeel, who learned that creating impact is the top priority for selective college admissions, shares: 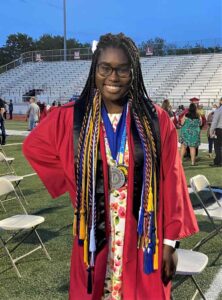 Hananeel, thanks so much for joining us. Can you tell us where you’re from?

I’m from Overland Park, Kansas. The Black population is so small, but I think the Asian population is almost nonexistent in this area. In elementary school, I was often the only Black person in my class. I think that’s a heavy burden you have to carry, because whether or not you want to, you become the spokesperson for your entire race. And that’s not something that anyone should have to carry.

I got really used to doing that in elementary school and in middle school. In middle school, this divide grew even more as I got more into these honors-level courses; there was no one that looked like me in these courses. You just get so used to being that token Black person that everyone goes to. I think many people use it as an excuse to justify their actions, their behavior, or really whatever that is, because they know one Black person.

How did the race relations in your hometown affect your high school experience?

By the time I got to freshman year of high school, that’s when I was really like, “Okay, I’m tired of this, I have to do something about it.” So I proposed the idea of starting an organization, The Coalition of Racial Equality, for everyone in the school who felt marginalized or excluded, just giving them a safe space to authentically be themselves, where they could come into this room and they didn’t have to carry that burden of being a spokesperson for the entire race. I did receive backlash for starting that, and it almost wasn’t approved. There was one administrator who deemed it controversial and unnecessary. She just didn’t want to have to deal with the White backlash that was going to come with that.

Did your high school environment affect your college prep process?

15 minutes away from where I live and work and go to school, there’s another high school that’s in my district that’s ranked in the top 2% of high schools in the United States. There were these massive economic disparities. In many ways, I took advantage of that. If this school is 15 minutes away from me, then I’m going to take advantage of their resources, because I don’t have that at my school. I understand that in comparison to so many others that I do go to a pretty privileged high school, but it doesn’t compare to what this other high school offered.

I knew that if I wanted to really become the best version of myself and really make this impact in society that I want to make, that I have to aspire and go higher than that. Since eighth grade, I had been looking at these top 20 schools. I did have some of my counselors and some people tell me that I was aspiring too high to go to Vanderbilt, or to go to really any school that was out of my state, because everyone had gone to these state schools. I remember when I spoke to one of my counselors and she told me to focus my attention off of Vanderbilt and start focusing on K State, University of Kansas, or any of those other schools. I remember saying that day “I will prove her wrong.”

I’m impressed by how young you were when you started thinking about college. Eighth grade is usually when students are just starting to get the hang of academic performance. How were you able to be so forward-thinking?

I had this one friend from Nigeria. In middle school, we automatically connected because of these shared experiences that we had often being the only Black person in these advanced courses. We really motivated and friendly-competed with each other. So when she said that her sights were set on Stanford, my sights were set on Vanderbilt, we were committed to doing whatever it took to get into those schools. And so when I found an opportunity, or when she found an opportunity, we would share those with each other. We leaned on each other in those really hard times, because those times did come. She actually did get into Stanford, by the way.

Wow, it looks like having that accountability partner really helped. Was there anything else that helped you plan for college as early as in middle school?

Sophomore year, I won the Princeton Prize in Race Relations, and I met this one lady who, when she met me, she said she was going to stick by my side the entire time. And she did that. We meet every single month. She has helped provide me with mentors that I needed. Her daughter went to that one high school that’s ranked in the top 2%, and her daughter’s currently at Vanderbilt as well. She did everything she could to really just help me out.

For the selective colleges like Stanford and Vanderbilt, how did you know what it took to get in, beyond the admissions requirements posted on their website?

To really to answer your question, I knew that to get into these schools, I would have to show impact somewhere. In eighth grade and ninth grade, that’s when I really committed myself to social justice and racial justice. Everything I did I was able to tie that around that. So how I knew what it took to get into these schools was that I knew that I had to follow my passions, and follow my passions in a genuine way. Oftentimes, people are doing these activities to get into these top 20 schools. I didn’t really go about it that way. I did these things because it was important to me, but I knew that it would help me in the long run.

What was the impact you made on your community that you believe Vanderbilt saw and appreciated? 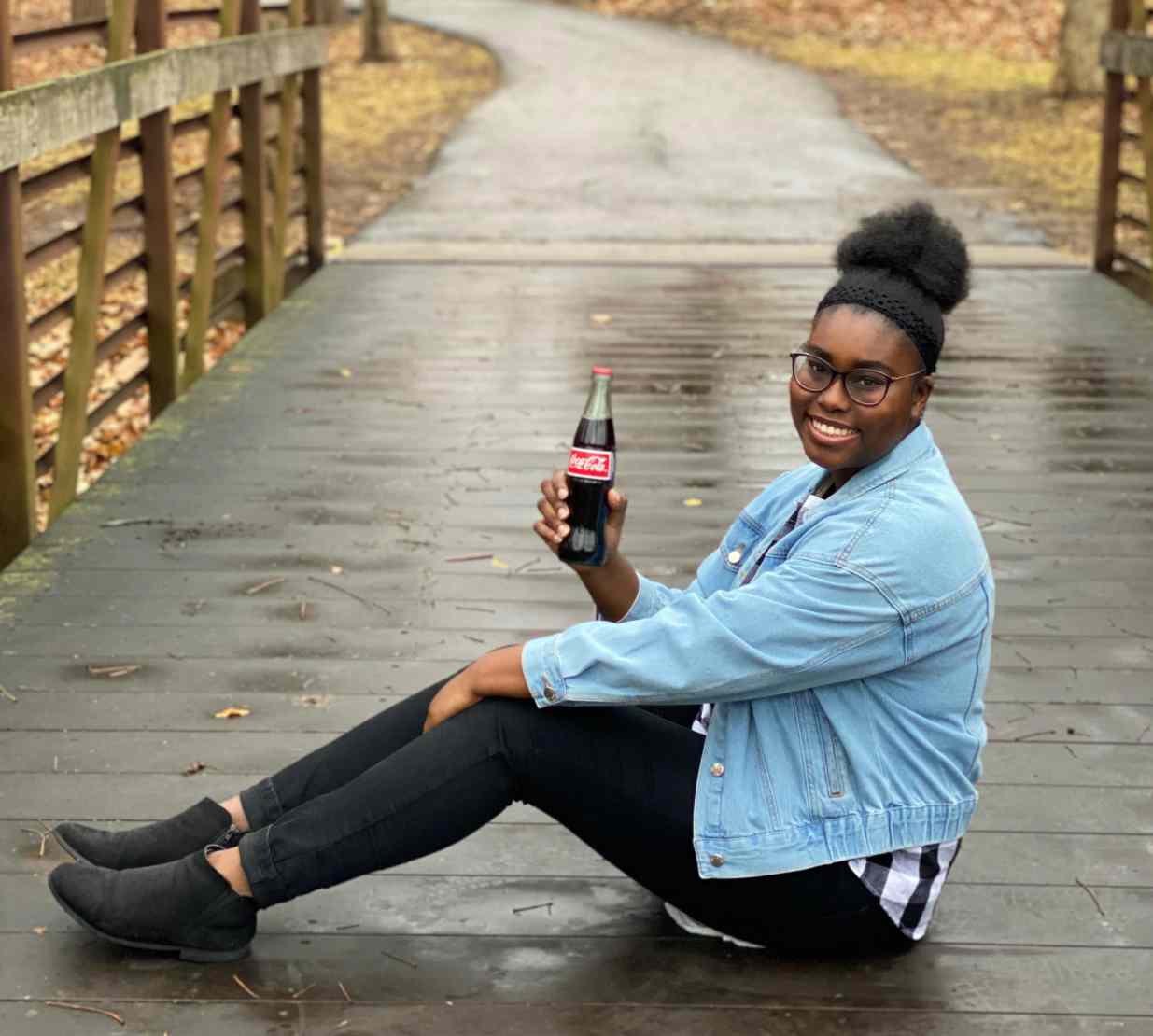 When I walked into my high school, the mascot was the Indians. We were so racially divided, so socially divided. There was so much racial tension within the atmosphere. That’s not an atmosphere that anyone would want to go to school in. So from day one, I committed myself to changing my atmosphere for myself and for other students. I started talking about our school mascot. Having an Indian as our mascot is racist, because an ethnicity is not a mascot. I remember when I said that that so many were shocked, because very few had come out and condemned our mascot before. Again, I started raising conversations in the school that people just weren’t ready or willing to hear yet. That was something that so few had done.

Most importantly, just being able to change the culture was something that was so important to me. Our mascot, after four years, is changing. Starting next year, we’re going to be Bisons instead of Indians, so it’s really powerful to see all of that pay off.

Being the driving force for social justice is more than a full-time job. How did you manage that and your other commitments at school?

I understood that the work I was doing was greater than myself; that this work wasn’t about me, but it was about the people I was going to be affecting, and the people that I was going to be impacting. Freshman year, I read The Autobiography of Malcolm X, and that book forever changed my life. Even when no one stood with Malcolm, he continued going in his fight, because he understood why he was doing it. And so in those moments where I felt unmotivated or discouraged, I understood why I started doing this in the first place. I did find those ways to balance, like “Here’s how I’m going to continue fighting for social equality, and here’s how I’m going to continue my schoolwork.” The work that I’m doing, it’s always greater than myself.

There’s an overachiever pandemic where high schoolers brag about not sleeping a lot or having a full schedule, even when it harms their health. What was your experience with that?

I do remember oftentimes going to sleep at two or three in the morning and waking right back up at six to get ready for school. For the younger readers out there, I would say that if you can find that time to sleep, because I wasn’t sleeping, I got really sick, actually. Even as I was sick, I was like, “Oh, it’s okay. It’s just a little sickness, I’ll keep going.” And then my body made me stop, because you cannot function well with two to three hours of sleep. I understood later on that if I want to be even more productive, then I should be sleeping more.

Covid happened during your final years of high school. How did that affect you?

In those moments where you do have time to rest or you do have time to meet with your friends, take advantage of that, because you’re going to look back at high school after you’ve gotten into your dream school, and your biggest regret is going to be like, “I wish I rested more,” or “I wish I spent more time with my friends.”

Can you retell the story of what happened when you found out you got into Vanderbilt?

I was in the living room of my house. I was hosting an online virtual debate tournament. The doorbell rings, and no one gets the door. My mom is in the kitchen next to me, she doesn’t get the door; my family’s upstairs. I get the door, and there’s no one there. I looked down, and I see there’s a package on the floor. I pick it up, and I see it’s addressed to me. And I’m like, “Did I order anything? I don’t remember ordering anything; I don’t think so.” I’m like looking around the box, and I flip around the box, and I see Mosaic 2025. Mosaic is this one program at Vanderbilt where out of all of the applicants that apply, out of the ones that are admitted, they choose around 200 students to get in early.

Wow, that’s incredible. Speaking of your family, how did they influence your college app process?

My older sister actually went to college pretty near us; it was three hours away. My second oldest sister decided to go to community college for two years and transfer to another school that was near us. Both of them are homebodies, so they wanted to stay near home. That’s not something I wanted.

If you had to put yourself in the shoes of the admissions officer at Vanderbilt, what got you in?

What is yield and why does it matter?
Do college admissions officers actually look at social media?
Rescinded offers: Do senior year course changes affect it?