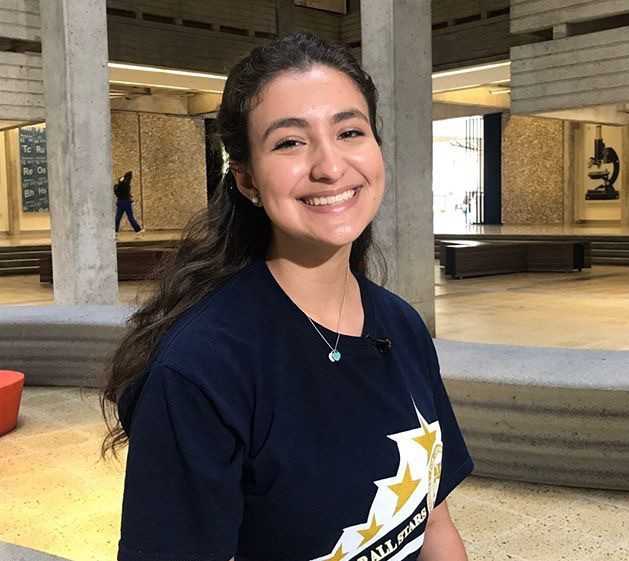 And he just ran back in and we just started crying around my desk.” Daughter of a former political prisoner from Cuba, Janet Hernandez is the youngest field director of a state senator campaign in Florida history. She got into Harvard herself with 12 APs (5s on nine of them) a 1520 SAT and 5.37 GPA– all without tutors, consultants, or counselors. Here’s her incredible story of positivity, persistence, and independence.

Janet, thanks so much for sitting down with us today! To begin, can you give us a picture of what your high school life is like?

I go to school in Miami, Florida at a school called SAS. I’m a full-time dual enrollment student at my local community college, and my school is only for the 11th and 12th grades. I come from a competitive high school, but it’s all very family-like at the same time. It’s a very small high school compared to a lot of the schools here in Miami, which have graduating classes of around 1000 kids, whereas mine has around 120 kids in our graduating class right now.

What classes have you taken so far?

In terms of academic rigor, I’ve taken around 12 APs total, most of them being in the Social Studies Department. I’ve maxed out all my Social Studies just because I’m a huge history buff and I really love government and politics. I think European history was probably the best class I’ve ever taken. I took it my sophomore year and I’m kind of a Renaissance nerd, so that was my all-time favorite class. Right now, I’m only taking three APs my senior year: Spanish, Calculus BC, and Literature.

That’s impressive — 12 APs. What about any other classes you’ve enjoyed in high school?

For electives, I was on the debate team, and we have a certain class for that.  One of my main things during high school was doing things related to government and politics. So that was also another one of my favorite classes: US Government and Politics. And I really enjoyed macroeconomics and just everything having to do with society.

Earlier you talked about being a full-time dual enrollment student at your local community college. How does that work with your high school?

That’s so cool. You’re like college student while still being in high school. Does everyone at your high school do this?

No, it’s a special program within Miami-Dade. SAS is only for full-time dual enrollment students. I went to a different high school where I did IB my 9th and 10th grade, and then I transferred to SAS for my 11th and 12th grades.

When you’re not running from high school to college, how do you spend your time outside of academics?

Outside of school with my extracurriculars, I think the main thing that got me into Harvard and what made me a competitive candidate was the passion that I showed for the issues in my community. I come from a lower income background. I live in Miami, specifically in Golden, Florida, which is right outside of Miami and where gun violence has been a really prevalent issue in the community. Outside of school, I started my organization. It’s called We Are Our Future. I basically started it to get young kids like myself that are low-income and minority more involved in politics and in addressing issues that are happening in our communities as well as to create a vehicle into which I can do community service with kids in my neighborhood that are interested. We’ve worked with another organization called Mothers Fighting for Justice, which was a group that was founded by a mother who lost her son and other mothers who have lost children to gun violence here in Florida. And I worked a lot with the March For Our Lives movement down here in Miami, because Parkland was only an hour and a half away. That really kickstarted my own activism within that sphere of gun violence, and then it just spiraled into a whole bunch of other issues that I tried to address with my nonprofit and by working with politicians in my area.

Wow, tell me more about that. What do you mean by working with politicians in your area?

I began working with politics my sophomore year. I began as an intern in an office for a state senator, my local state senator. I just began with typical intern things like taking phone calls. I guess I was very persistent in trying to address all the issues that I was having within my community to my state senator, to the point where a job opportunity came up in her campaign, and instead of hiring outside, she hired me. And so I became the youngest field director in Florida history for a state senator campaign.

Thank you. Yeah, I was very annoying and very persistent, but at least she saw that I really cared about my community and what we did, and she got reelected.

Wow. You really get the job done!

That was my main thing: I just really cared about getting those issues out. I really used the state senator that I worked for as a way to communicate what organizations like Mothers Fighting for Justice was communicating to me. I would sit in on meetings where they would just try to address their grief and how they were trying to deal with it, and [where they would talk about] the new shootings that were happening, which were happening daily at that point.

[They would also talk about] the lack of support that they would see. I jotted down all the notes. This is actually my Harvard supplemental: I jotted down notes on my legal pad, and I just took them to the state senator that I worked for. I was like, “You have to read these, in the states senate. If you don’t read these, this bill will not pass.” Part of the School Safety Act or the MSD bills that have come through with raising the age in Florida, that was one of the filibusters that my state senator gave: notes from families who had lost children to gun violence.

How did you manage your time working as a field director, running your own organization, and managing your schoolwork?

Well, it was very difficult at first. I started working toward the end of my sophomore year. It was a huge adjustment going back to school while I was still working, because of the pressures of junior year, a new school and everything.

I think that the school that I went to had a big impact on how I was able to manage my time, just because of the flexibility in the mornings with the college classes. I had a lot of time in between to basically work offline. It took a lot of patience and being able to plan accordingly with everything. Google Calendar became my best friend, and I meticulously planned out blocks for everything in my day. It eventually worked out.

When it came time to apply for colleges, how did you narrow down your choices?

Initially, when I first began looking at colleges, the first factor that was the most important to me was affordability. I’m coming from a low-income background. I knew that going to a place like my state school or an out-of-state school that didn’t offer much aid was just not a possibility for me unless I got a huge scholarship. So I mainly started looking at Ivy Leagues and more selective colleges, not because of their prestige, but because of their generosity with their aid.

2020 Top Admits: Jane Doe, USC '24
What's a good Ivy League checklist?
How My Life Changed After Getting into Harvard