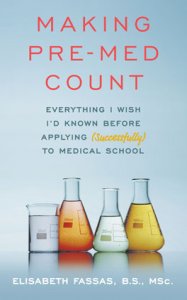 “The first time I took the MCAT, I got a 516.” Elisabeth Fassas, author of Making Pre-Med Count: Everything I wish I’d Known Before Applying (Successfully!) To Med School and med student, talks about what she knew before getting into med school, why she took the MCAT twice, the interview question that stumped her, and traits of successful med school applicants. She graduated from Johns Hopkins and the London School of Economics, worked at McKinsey, wrote a book, and now studies medicine at the University of Maryland.

Elisabeth, tell us about the moment you found out you got into med school.

At the time that I applied, I was doing a master’s degree abroad, and I had been traveling back and forth to the States to do my interviews. It had been pretty stressful. I go to the University of Maryland, which was also my first acceptance and the one that I was most excited about. I actually 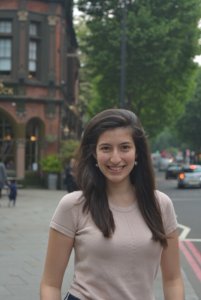 saw a little note at the bottom of their email, in those teeny, tiny, grey letters that said something like: “As soon as you receive your acceptance letter, you have 10 days to tell us.” I think I misunderstood what was being said; I read that I had 10 days to respond. So I ended up calling the school and the woman on the other end of the line was like, “Don’t worry about it. Acceptances haven’t come out yet, and actually, I see that you’re going to be discussed in committee this Friday.” It was Wednesday, “so in two days, we’re going to discuss you in committee.”

And what happened in committee?

She actually gave me a call back that Friday and was like, “Just want to let you know that it can happen. You are going to receive the letter. I don’t want to give too much away, but don’t be worried about it.” That was super nice. It was a really fun weekend celebrating. It was great. It was a really great feeling to think, “Okay, now, it’s done. I got in; I’m going to be a doctor; everything worked itself out.”

That’s incredible. What was your undergraduate background?

From that point, I realized that I really do love medicine and I want to be a doctor, but there’s so much that medicine itself–the one-to-one relationship with the physician–can’t solve. So I was trying to get a little bit of a broader perspective about healthcare housing, healthcare food insecurity, healthcare insurance coverage, and how I could get a greater handle on those complicated issues. When I did that, I realized that I wanted to spend a little bit more time diving into those types of topics and started applying to master’s programs. So I did a year-long program at the London School of Economics in international health policy and received my acceptance that year. I had also been applying to jobs that year just in case I didn’t get into medical school. I was accepted as a healthcare researcher at McKinsey & Company and then decided to defer my acceptance for a year to do that. I also started writing a book during that time.

Now that you are in med school and have gone through the process, how do you think the admissions requirements should change to reflect what med students really need to know?

There is a really big component in the admissions process that is basically: “Prove to me how passionate you are about medicine, how much you want to be a doctor.” I think especially in the beginning: the first year — and I would even argue the first six or seven months — when you’re doing anatomy and molecular and cellular biology stuff, it’s obviously pertinent to medicine, but it feels very separated. Having a drive behind you to say, “Okay, this is why I’m doing this. This is why I’m studying 10 hours a day. This is why I’m having tests every three weeks,” is really, really helpful. I’m seeing even my classmates referring to it all the time, like, “Okay, it’s okay. In three months, we’re going to be seeing patients.” Just having the clinical experience to draw on and say, “All of this stuff is leading towards something that we’re all excited about and that we’re all passionate about,” I think has been really, really helpful. And that’s definitely a big requirement for admission: to show that you’ve exposed yourself to that and that you do love it enough for it to be a drive through all of this preclinical work.

Do you think that aspect should be emphasized more in admissions, instead of the MCAT and grades that are currently the most important?

I think that the foundations are definitely very important: being able to follow along with the material is dependent on how comfortable you are with the basic sciences. That being said, I think that the admissions requirements for the MCAT and the GPA  are an important component for schools and for students, but I think on a day-to-day basis, having exposure to clinical experience, and really knowing why you’re here and why you’re doing all of this is really, really critical. I think that schools definitely do put a tremendous impact on it.

In your book, you talked about how you took the MCAT once, then decided to retake it. Can you tell us that story?

The first time I took the MCAT, I got a 516, which is good. I’m not complaining about that. My bio score was really low – it was like the 67th percentile, whereas the other sections were much higher than that. So I was fine with it at first, really happy, even celebrated when the score came out in August. And then as I started to think about it more, I got more and more worried about this one score not being where the rest of them were. So I went to my pre-professional advisor in my undergrad, who was awesome and whom I had a really great relationship with. She was like, “Oh, that’s really interesting. I’ve never seen anything like this before in terms of scores.” She was like, “I think it’s okay. Why don’t I chat with the other people in my office and I’ll shoot you an email? We’ll give you an informed opinion.”

What did your advisor end up telling you to do?

She goes, “Okay, you’re a mol-cell bio major. You didn’t have a 4.0 GPA. There are some bio classes that you didn’t get As in. I’m not sure; maybe they’ll be worried that you’re not that good at the bio stuff and maybe that’ll be a worry, but I’m not concerned.” As soon as she said that, I started stressing myself out about it. I wasn’t sure what to do. I actually asked a lot of people, family and friends: “If this were you, what would you do?” I think no one told me to take it again, but I decided to do it anyway. And then the second time around, I got a 511 or 512. All my scores except for psych and soc were exactly the same, including the bio score, even though I did nothing but study for bio. It was sad, obviously. I also had a brief moment where I was like, “Maybe I should take it for a third time,” but I got talked out of that really relatively easily.

The MCAT tends to be one of the biggest stressors. From reading your book, I know that you’re an MCAT instructor. What are the most common MCAT mistakes you witness among your students?

I think two really big things. The first thing — which is what actually got me to write this book because I thought, “Wow, there are some things that people just aren’t thinking about correctly at all” — is when people try to take the MCAT for practice without really being prepared to do it. They just give their best shot and hope for the best and then decide to retake it if they need to later. This was super surprising for me, because first of all, taking the MCAT is super expensive, super time-consuming, and requires a lot of work on the back end. But also, because having a negative score on your application can only hurt you. There’s no benefit to it. You can’t really wing the MCAT. I’m sure people do, but I would say the average person can’t really wing it and do well. That was number one.

It definitely makes sense not to jump into it. What’s the second most common mistake?

I see this with students all the time. People say to me, “Okay, I’m just going to take 10 practice tests in 10 weekends, and then I’m going to go and take the MCAT, and I should be fine because of all that practice.” And yes, practice is very, very important, but I always say that the benefit of practice is not just that you’re doing a lot of practice questions, but that you’re really taking the time after to squeeze every piece of information out from each and every practice problem about how you function as a test-taker and how the test-maker thinks versus how you think about these questions. So really the key is sitting down with your practice and taking the time to assess, “Where did I go right here, where did I go wrong? What can I tweak about the way that I’m approaching the question so that I don’t get the same question wrong again, a week from now, a month from now?” –rather than jumping into continuous practice without that reflection.

What is common among your successful MCAT students?

I think that there are definitely students that are not afraid to sit down with their mistakes and really critically assess the way that they were thinking and also students that aren’t afraid to dive into material that they haven’t seen before. College curricula will vary a little bit in what is actually covered and there’s obviously a very well-known set of material that’s on the exam. So I think that the most successful students are the ones that are willing to dive into the books on their own and really think critically and sit with their mistakes and take the time that it takes to do that.

Teacher Columnist: 3 Things I Wish Parents Knew About College Admissions
Admission to Undergrad & Med School as a High Schooler - Is This Right for Your Student?
Berkeley Admissions Pre-Read: Julia's Journey