“Because my family is a well-known Black family in the Black community here in Charleston, I sometimes am also trying to uphold a certain standard and not fall into the peer pressure and environments that people sometimes are pushing me into,” says full-ride University of Southern California (USC) admit Justice Wooden who was raised by his grandma and seen as the “nerdy kid” of his community.

This week, the future Trojan discusses: 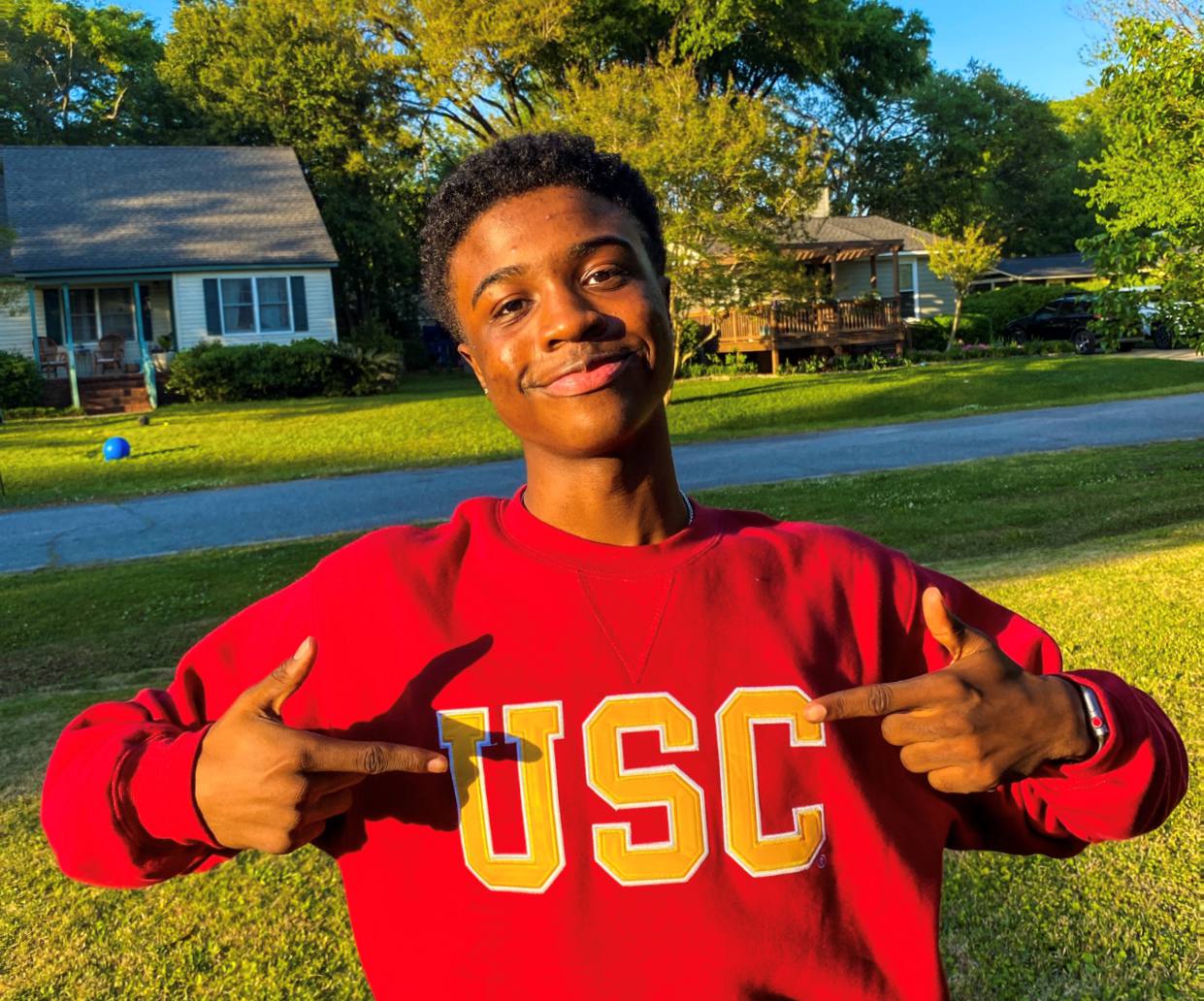 Justice, thanks so much for joining us! Where do you go to school?

I currently go to Charleston County School of the Arts. I’m a dance major at the school. It’s connected to an academic magnet high school, which is on the same campus. We’re the number one and two schools in the state.

How did you get into dance in the first place?

I used to perform in an after-school program every year as a recital, a little talent show that they had. My grandma always signed me up for it, so I did it every year. In third grade, I was invited to this academic camp for gifted and talented students at Charleston County School of the Arts, an hour away from my house. After I was there, I got to see some of the dancers that were having lots of fun, and they were at a different summer program. So then I went back to school and I was like, “That’s what I’m doing next summer.”

What is your dance expertise?

I’m ballet-trained. I actually think that most people know me now as a jazz or contemporary dancer. That’s my personal dance style that I think is the strongest. I also love improvisation in any style.

Congratulations on signing with USC. What happened when you found out you got in?

I knew that USC was coming out on March 30, so then my anxiety started building up. The day of, I didn’t go to dance and I didn’t go to school. I stayed at home and I slept all day until all of my friends started calling. They started calling my phone and it woke me up. It was 6pm, and it was because the decisions came out and they wanted to know if I got in. No one else was at the house; it was just me. I opened it up just on this same computer and started screaming, running around. I couldn’t even believe it. And then I called my grandma, and she came home honking down the whole entire street. People were starting to walk towards our house. Family started coming over.

I love the fanfare your community gave you. How did you decide on USC as our first choice?

I stacked the artists that they were bringing in, the academic curriculum that they had against the other schools. I also considered financial aid, and location was a major part. I knew I personally wanted to live in New York or LA. While I was going through the process of applying to the schools, I actually created an Excel sheet and listed out all of the pros and cons to each school. It just happened to be that the USC list of pros was the longest. I had two different columns of pros and only three or four cons compared to other colleges.

College isn’t always necessary for professional dancers. What encouraged you to study dance in college?

One of the pros that I like about USC is that you have the option to pursue a progressive degree. That’s when you graduate with a bachelor’s in dance, and then also have a master’s in a different discipline or a different major. That to me was something that I really wanted to pursue because I love dancing and I want to do it for the rest of my life, but I also want a regular college experience.

What were some of the most challenging aspects of the college application?

Being virtual was the hardest part, because you have to film all of your videos. Because it’s never been done before, you don’t really know how to prepare for it. You don’t know who the panel of judges are going to be or what they are looking for. Outside of that, the second thing would probably have to be the essays.

Can you share the resources you used to write your college essay?

What was your college essay about?

On the Common Application, out of all of the prompts, I chose the last one: to design your own, or talk about whatever you want.

My mother actually passed away when I was very young, so I’ve lived with her mom, my grandma. And that was a major part of my story growing up. There’s a generational difference between us, so it’s hard to sometimes relate to everything, although everyone thinks that she’s my mom because she is young. She’s a young grandma, and she’s hip or with the trends. Sometimes it doesn’t feel that different, but there are just some different principles and experiences that she didn’t have. I just basically had to do a lot of things myself at the same time, because I also don’t live with my father. He lives in Atlanta, Georgia.

We’re local to Charleston, South Carolina. There are a lot of slave descendants expanded into lots of massive families and especially massive Black churches. Because my family is a well-known Black family in the Black community here in Charleston, I sometimes am also trying to uphold a certain standard and not fall into the peer pressure and environments that people sometimes are pushing me into. Also embracing my sexuality was something that I had to terms with, which is hard when you have such a strong Christian family; sometimes they don’t understand, but they all came around. So that’s really what my essay talked about, all in 800 words, I think.

How do you think you’ve surprised your community based on their expectations of you? 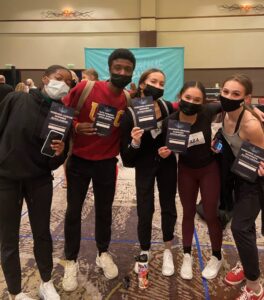 They had this image of me being a nerdy kid, and they thought I was just going to become a doctor or a lawyer, or something else… Once they started seeing that I was dancing and then I started traveling for conventions, and when I started dancing in my church, my community started acknowledging that I was going to be a dancer… Now they love it, because they know the school that I’m going to. They knew that whatever I did, it had to be big. I knew I couldn’t just go to a dance school in state.

Do your friends and family ever confuse USC with the University of South Carolina?

Every single person. Every single time. I have a USC key lanyard, and any time somebody asks me, I just have to pull out the lanyard to clarify, like, “This USC. Not U of SC.”

Earlier you talked about your preference to study in New York City or Los Angeles. Can you tell us how you narrowed down your location preferences?

In order to get signed by one of the massive agencies that I want to work with, they’re New York City- and LA-based. In the future, the types of jobs that I would like to book, whether national or international, a majority of them require you to be LA-based.

Outside of my dance schools, I chose a school in Spartanburg, because they’re in a vicinity where you can have access to the mountains, and there are also lots of historical things in the area and historical programs in the area. I applied there for a political science and African American Studies double major. And then in Columbia, I applied to the school for nursing, because I wanted to be close to a school that had a nursing program and a hospital within close range.

For all the schools that I applied to, they were very intentional and location-based, because my guidance counselors and my teachers taught me to be goal-oriented. You don’t have to know everything, but take advantage of your opportunities while you’re there, like your off-campus opportunities on the weekends or during summers; you might want to get an off-campus apartment and that type of thing. That’s the major reason why location to me plays a big role.

How did you navigate the rejections from colleges? That’s one of the most disappointing parts of college applications.

I applied to Juilliard, USC, Fordham, Marymount Manhattan, and Point Park for dance, and then Wofford, University of South Carolina, and Winthrop University, another South Carolina school, for various majors. The only school that I didn’t get into was the Juilliard School. It didn’t really hurt, because I found out early on. You just have to remain optimistic and know that even if, for example, if even if I was at College of Charleston or University of South Carolina, the schools that are less competitive but are still great options, and there are ways to transfer to other programs if you need to. I navigated through it just knowing that the rest of the schools, even if they’re safeties — I don’t consider any school a safety, because you just never know what’s going to happen — provide opportunities in themselves that will allow you to continue to take steps towards your new career or whatever it is that you want to do.

It’s incredible how you received so many acceptances. How did you balance your extracurriculars and academics?

I was stressed, very stressed, throughout high school. I honestly think I did the most. I think I was going into high school trying to be competitive with the same group of kids, but I was also working a job on the weekends, dancing over 35 hours every week, and I ran a club every week. I only took seven AP classes throughout my high school journey, and I think that that’s too many.

Colleges are like shoes. They look the same, but don't fit the same.
Parents of College Applicants: Three Dos and Don'ts
2020 Top Admits: Jane Doe, USC '24