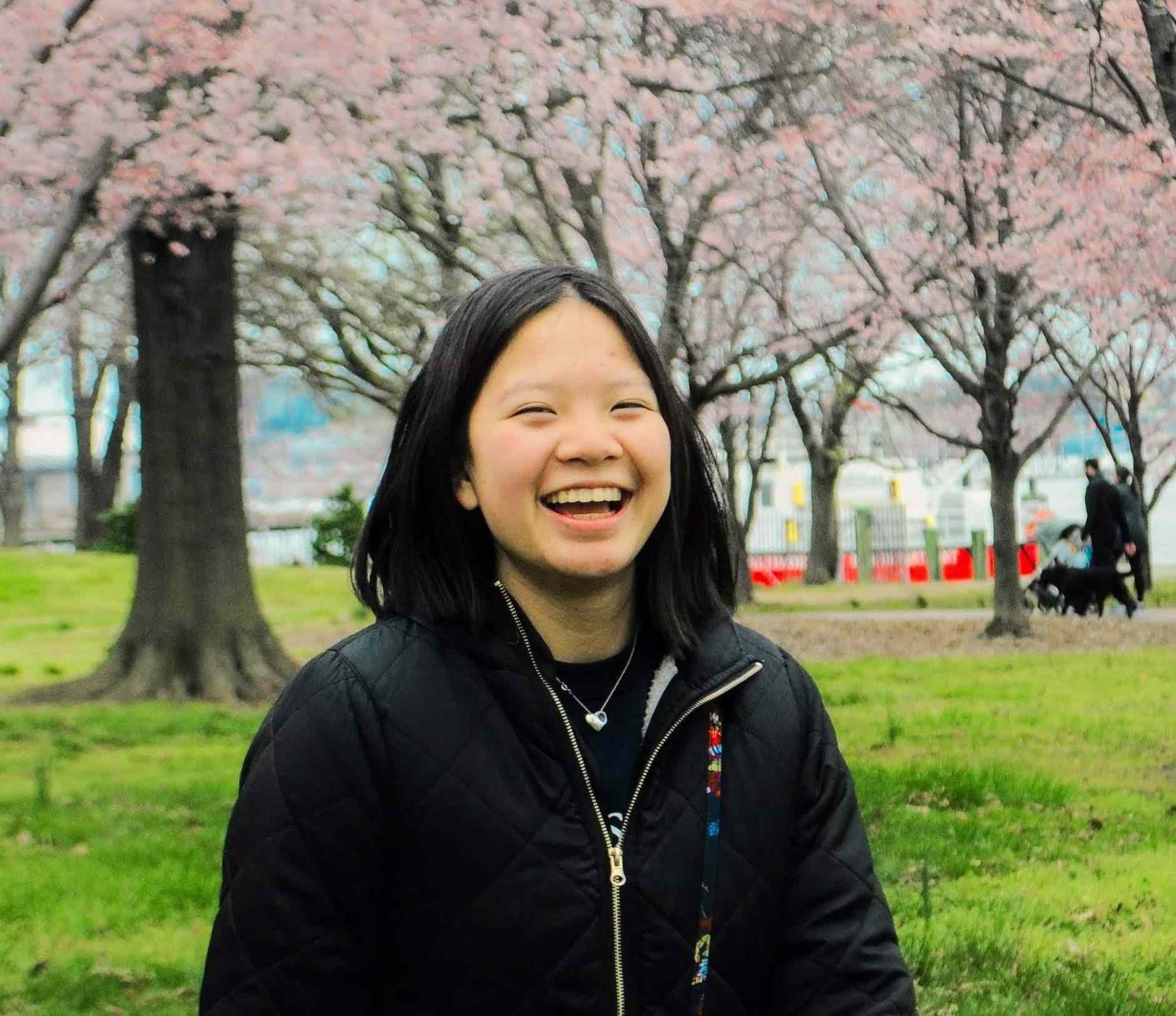 “When I was applying, I thought I never really had a chance with schools like Johns Hopkins. I am pretty normal person,” says Alexandra “Zandy” Wong, admitted student to Johns Hopkins’s neuroscience department. The incoming JHU freshman shares how hearing loss and bullying led her to become a social self-advocate, how she landed a computer science internship at the University of Maryland, why she regrets applying to so many safety schools, and how her essays got her in. Read on for Zandy’s takeaways on optimizing college fairs, narrowing down her college list, prepping for the ACT, and the truth behind low scores on AP tests.

Thanks so much for joining us today, Zandy. What do you think got you into Johns Hopkins?

Definitely my essays. I put a lot of time into that. I’m just pretty much a normal kid besides that.

How do you think your essays set you apart?

I knew instantly what I wanted to write about. I wrote five drafts of it and I got edited. It took a lot out of me to write that essay. I think I just took risks in my essays, because for my Johns Hopkins collaboration supplement, I wrote this metaphor comparing myself to a chameleon, saying I transformed into a chameleon. I wrote about how I learned to tutor people, and how that taught me how to listen and not override everything that people were saying and how to adapt in collaborative settings. I was definitely a risk trying to compare myself.

Can you share a line from your essay that you’re proud of?

The first line says, “I transformed into a chameleon that’s triggered by sound.” It’s this idea of when you talk to people, you have to adjust and fit their comfort zone to mold something better. I think that was definitely a big risk on my part, because it could come off a little bit insensitive sometimes. But it’s what I wanted to write about. I got the idea for that because one of my friends who had gotten into Johns Hopkins the year before had written about the Writing Center, too, but I didn’t want to do the same thing as her.

What about your Common App essay?

I wrote it about my experience with hearing loss and the bullying I faced. It’s called “the silence of sound,” this metaphor of the idea that bullying isn’t just associated with taunts and people deriding you; it can also just be silence: no one’s willing to include you. No one’s willing to speak up or say anything. It’s also the laughter that can create a really hostile environment. I wrote about that, and about experiences I faced, and I wrote about how that didn’t really define me anymore.

Picked for you:  Tips for Parents: How to Really Help Your Teenagers Through College Apps During Covid

What do you mean by the experiences you faced?

The main incident had happened back in December of 2018. I started writing in April. It was really hard to write, because I would tear up writing about it. I used the metaphor of music, of sound.  I included this metaphor about the one time I did blindfolded piano improv. The opening scene is about me stepping on the stage, about to do blindfolded piano improv, and then it’s a switch back to going through my experience as a teen with hearing loss. It’s this idea that once I had finally done that piano improv, I finally was comfortable with my identity and who I was and not letting that define me. I wrote my essay back in April, and I had just finished dealing with the aftermath of that incident. For the first draft, I just did a brain dump, and I actually got a lot of really good ideas out of that. I just let it sit for a while. I was like, “Wow, this is a really good essay.”

What resources did you utilize for help on your essay and who did you ask for help?

My 11th grade English teacher said it was “really darn good already,” but I came back to it and I showed it to my older sister. My older sister was the only one who edited it. At the time, she had graduated from college and works for NPR and is big into journalism. So she’s a great writer, and I trust her stuff a lot. I would write and send it to her. My writing center director helped me edit a little bit, but that’s about it. I wrote about five drafts, and each time got her to edit it. That’s how it turned out the way it’s supposed to be.

Alright, let’s back up a little bit and talk about your high school experience. Where did you go to high school?

I went to high school at Hayfield Secondary in Alexandria, Virginia. We have about 3000 students because it’s grades seven through 12, so about 500 students in my grade; it’s a pretty big school. We’re pretty diverse. We have about 30%, free and reduced lunch, and I’ve always loved going to Hayfield because of the diversity. I get to meet people from all different backgrounds, and I’ve managed to make friends with pretty much everyone, so it’s really great learning their perspectives.

Can you tell me about the classes you took at Hayfield?

Most of my classes are pre-chosen, because there’s a certain route you have to follow. So I took English, math, science, history. I took a 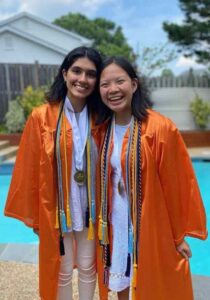 Was Hayfield an IB or AP school?

Some people think they need to take 18 AP courses to get into a school like Johns Hopkins. How many did you take?

I took 9. Actually, when I was applying to college, I forgot to submit my AP scores. They didn’t help me anyway.

My guilty pleasures is that I follow up on Dance Moms and watch figure skating. That’s my guilty pleasure. But my main time commitment was working a part-time job at Mathnasium. I got to tutor kids. I played piano and was nationally recognized in piano for six years before high school.

Wow that’s impressive. How many hours a day do you have to practice to become a nationally-recognized pianist?

Just 30 minutes before I go to school. I did a blindfold piano improv, and I also won regional awards in music composition. I participated in PTA reflections and wrote pieces that reflected the theme.

Where do you think you get your musical talent?

Tell us more about your extracurriculars besides playing piano.

I did a lot of things in the summer. In the summer of sophomore year, I went to the Governor’s School for Agriculture, which seems really random. My junior year, I did an internship with the University of Maryland’s computer science department. 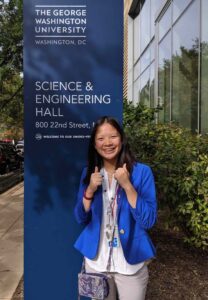 Basically, I coded and classified these files that create data visualizations, and I helped them create a machine learning algorithm that gives developers recommendations as they create these data visualizations. Hayfield Secondary is right next to Fort Belvoir, which is a major military base, so we have a strong student ambassador program to welcome new students and military students, because it’s often a really hard to transition into a new school. I was a student ambassador, and our program is nationally ranked, so we went to the national conference for that association and we got to present there.

Picked for you:  How NOT to appeal for financial aid

My sophomore year, I created brochures which were basically a quick how-to guide to Hayfield in a fun format. At Hayfield, I distributed about 500 of these copies for new students and parents, and there was really positive feedback. The year after that, around orientation time, I sent out the copies and the templates to all the high schools in the county. I was able to get it into every county high school, which is really exciting. I was able to distribute about 1000 copies there. That was my own individual project; it just felt good doing that. I also had a great time at the writing center. It’s actually a class you take, but I was able to tutor and I got to present at some national conferences. It was just a really big part of my high school career, because that’s where I found my community.

My other noteworthy accomplishment was that I was able to create an online recruitment system so it was able to process information faster. That wasn’t even coding; that was just Google Forms. I just made it sound fancy on the application. That was something I really loved doing. Then TSA. I was part of the Technology Student Association. I won seventh in nationals for future tech teacher. I really love teaching. I love seeing people smile and seeing that “aha” moment. It’s kind of strange. I have a lot of interests. I have interest in teaching and in agricultural biotechnology. My lessons for the past three years at TSA have been about GMOs and cloning. It’s seeing that agriculture is accessible; agriculture isn’t antiquated. It’s really interesting seeing that. Oh, and I did tennis and I worked a part-time job. Those are the major ones. I did a bunch of other stuff as well.

Your schedule sounds packed to the brim! How many hours did you sleep per night as a high schooler?

I usually got six to eight.

That’s great. I think I would’ve expected somewhere closer to four. How did you manage your time?

I didn’t really have that much homework.

Can you share how you landed an internship as a high schooler? Many students want to intern but find that their lack of experience prohibits them from getting hired.

I just found my internship when I was talking to my friend who goes to another local high school, and she had done an internship last year. It was an organization called STEMShip. It’s these guys based at George Washington University. They basically do the facilitating: They match up students that apply with mentors in their interest.

Colleges report rise in Covid due to parties
This elite college is bringing back legacy admissions
What is yield and why does it matter?

We spotlight the human voices
behind admissions.