5 Best Lessons from “The Overachievers: The Secret Life of Driven Kids”

If you fit any of the following criteria, you’ll find yourself in the real-life characters depicted in Alexandra Robbins’ investigation of the epidemic sweeping our country: overachieving high schoolers. Though published in 2006, the book remains relevant today in a persistently more competitive colle 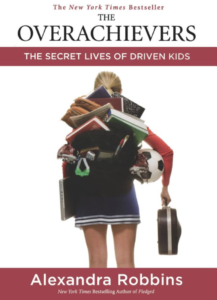 ge admissions environment. The teenagers featured in the book, though accomplished, shed light on the dangers of a highly competitive, stressful, all-or-nothing academic environment so prevalent in rigorous American high schools today.

Picked for you:  Tuition Relief Programs Rising Among US Universities

Are you killing yourself, your self-esteem, and your relationships just to get into college?

If you answer “yes” to any of the questions in our 5 lessons, you might be a part of the “American high school overachievers” epidemic.

5 lessons from The Overachievers: The Secret Life of Driven Kids.

1) Are you an athlete who pushes through injuries to compete? Have you gone to 5 a.m. hockey practices seven days a week since you were four years old? Do you feel incessant pressure from parents and coaches who can’t accept anything but the best athletic performance or ranking?

“The pressure to make ordinary children exceptional has become almost an epidemic in sports. The star mentality prevails, and the less talented youngster simply doesn’t get to participate. Play is out and competition is in.” p. 157

Picked for you:  A.P. Study Tips, Digital Footprint, and Legacy

The epidemic: Kid athletes want to shine at multiple sports. Their parents pressure doctors to operate on their kids when they’re injured instead of letting them rest so they can keep winning championships. They warn them that they’re falling behind if they don’t make the elite travel soccer team at age eight. Some parents even hire people to kill your cheerleading competitors.

Parents view sports as “the ticket to a valuable college scholarship or an edge in the admissions process at schools like the Ivies.”

But fewer than 3 percent of high school athletes will play any sport in college. And 70% of the 41 million children who play organized sports will drop out before age 13 because of pressure from parents and coaches. Many of them will have to sustain lifelong effects of injuries and overuse.