“I wrote my essay about my eyebrows,” says Hawaii state student leader, cheerleader, cook at L&L Hawaiian Barbecue, and aspiring hotel owner, Jessica Chang. Despite a 23 ACT, she got into Cornell, an Ivy League that accepted less than 9% of applicants, to study hospitality and return to Hawaii. This week: 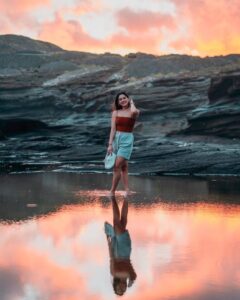 Jessica, congratulations on getting into Cornell! Tell us a bit about your background.

I am a senior at a school in a Oahu, Hawaii, called ‘Aiea High School, and I’m really heavily involved in my community and my school leadership. I am in different sports, clubs, and on Student Council throughout my community. So that’s a big part of my personality: a leadership girl.

Because I live in Hawaii, we are such a diverse community. So you see at least one person from every background and every culture. In Hawaii, we call the rest of the US the mainland, and unlike the mainland, we don’t have as much separation. We don’t see as much conflict when it comes to racism or a political divide in our community, so I would say that we’re very united. We share a lot of this concept of aloha and hospitality where everyone is super welcoming to each other. That’s what I love and what I’m going to miss the most about home.

What happened when you found out you got into Cornell?

That day, my friends wanted to go out for lunch, so I was surrounded with my friends as I opened it up. I remember my hands shaking. My hands went numb; I couldn’t feel anything. It was crazy because it’s my dream school. I had my phone. It said, “View status update.” I tapped on it. I was just silent. I just remember crying. And they’re like, “Oh, she didn’t get in because she’s crying.” But I was crying because I was so happy. My hands were tingling. It read, “Congratulations.” It was the best moment of my life. I really wish I recorded this.

Why did you choose Cornell as your top pick?

For me, it was more about Cornell’s program and how well their schools play to my major and my future. I want to go into the tourism industry and work with a lot of people from across the world and meet new, different faces, whether it’s travel with airlines or working in hotel. Basically, what I did was I just Googled “best hospitality major schools.” And number one on a list was Cornell University. And so that’s where it started.

Wow. How did you delve deeper than the ranking to figure out Cornell’s the right fit for you?

As I looked more into Cornell’s hotel school and their different programs, I fell in love with it, because I understood my potential and I know how well I’ve done and grown here in Hawaii, a small island. But I really wanted to go off somewhere and bring something different back to Hawaii’s culture. So that’s why I wanted to go to Cornell: because I know that they had the best program for my major, and it’s something different that I could bring back.

That’s so cool. Can you talk about your involvement outside of school? 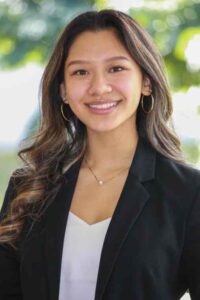 I was in Student Council since my freshman year, and I have served on as a student body vice president of my school for two years now. I’m also the president of the American Red Cross Club Speech and Debate team, the National Honor Society, and I was a cheerleader for two years. This last year we didn’t have cheer because our sports season was canceled.

I also am the Hawaii State Student Council chairperson this school year. It’s an organization made up of high schoolers from every school in the state, and I was elected as the chairperson this year.

I don’t want to sound braggy, but I’m also my school’s representative. We have a state world language advisory board for the different foreign languages that schools offer in our state. Because I’m one of the top students in my Spanish class, I was chosen to be the school student representative.

One last thing is I have worked a part-time job ever since my freshman year as well. I was a cook at L&L. And then now I work as a sales associate at PacSun, a clothing store. So I think all of these different things contributed to my acceptances.

How did Covid affect your extracurriculars?

Because I was in all of these organizations for quite a bit of time, a lot of my advisors asked me to be the president this year. So I wanted to maintain the continuity of these organizations as much as possible. So for clubs, like the American Red Cross Club, we did virtual service activities with my members, and I still hosted a blood drive. Not on campus like we usually do, but I still advertised and hosted a blood drive for seniors at different blood drive locations around the state. Even for National Honor Society, I designed a new virtual tutoring program where we partnered up with a local elementary school, and our NHS members would tutor these students every day, once a week after school and they would just help these fourth graders out and it’s so cute. Finding different alternatives and using technology to really be innovative this year — innovation was such a big thing — was really an essential part of maintaining the continuity of some of these events.

How did you manage such a heavy workload with all your responsibilities?

It was kind of easy because everything was online. So all I had to do was click a button at a certain time to log into different meetings. Because I was heavily involved in all of these events throughout my high school career, I already knew how to time manage and I knew how to organize. In front of me I have my planner; I always have everything I need to do for every occasion, every day, every event. I’ve been very good at managing my time. So I guess a challenge is basically getting other people to also be as time managed, or as well-organized as you are, because you can go and attend all these events, but it’s really hard to get other people interested or have other people join you and be as motivated as you are.

How involved were your parents in your college application process?

My parents, honestly at the beginning, were not very supportive of me wanting to go to Cornell. They never really looked into top universities besides local ones here in Hawaii. So when I first brought up the idea, they were nonchalant about it. They didn’t really know what Cornell was or what was the history behind it.

You can pay less to attend college out-of-state. Here's how.
2021 Top Admits: Alhassan Bangura, Cornell '25
To take or not to take: SAT and ACT