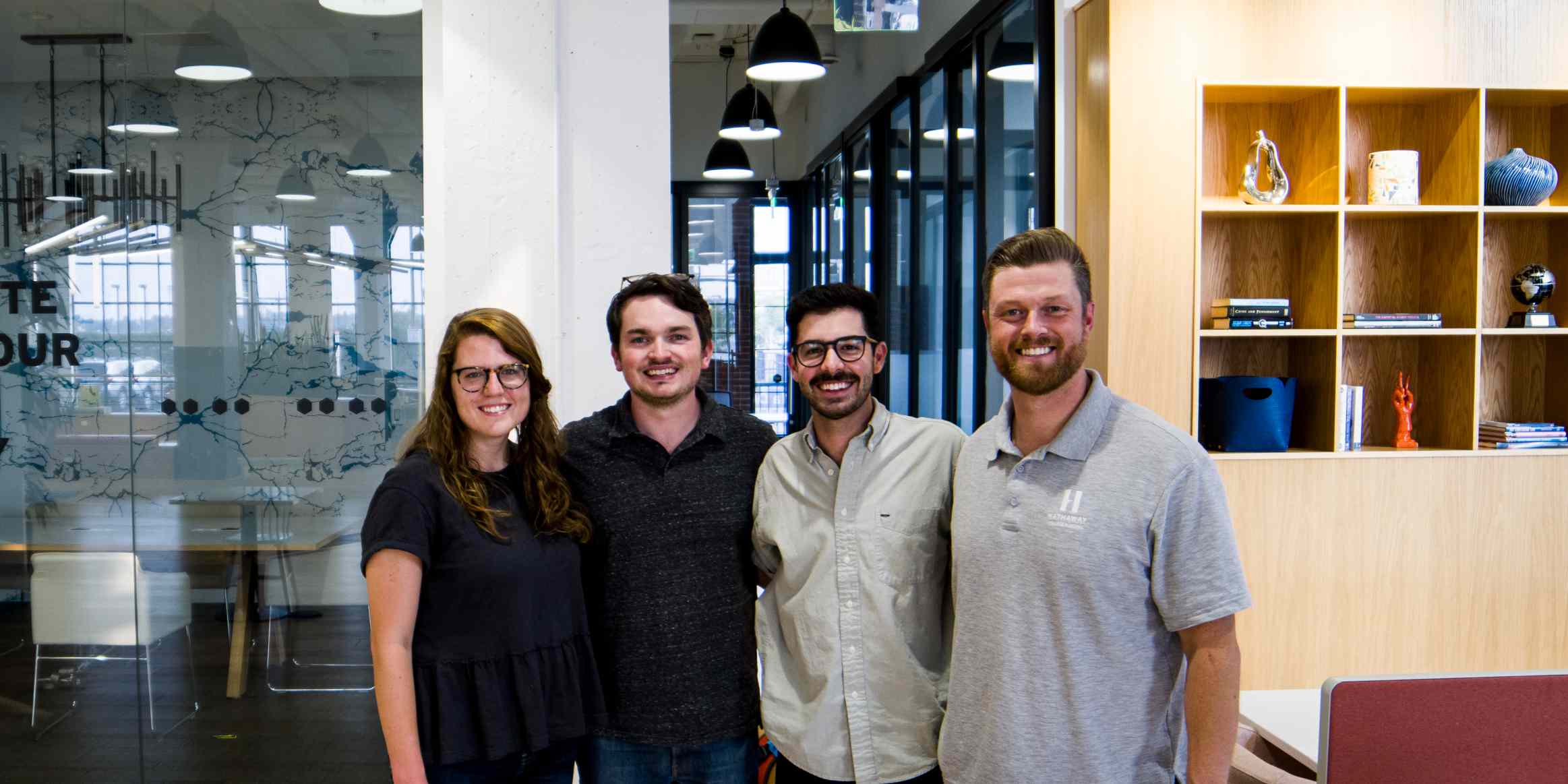 Andrew (right) with his team at Hathaway College Funding, based in Colorado.

“A lot of times, I find, as the financial advisor, that they do have the money; it’s just in the wrong places,” says college financial specialist, Andrew Hathaway, on middle-class families putting kids through college. In Part 2 of our interview, Andrew answers reader questions, including how college name brand affects employability, his future outlook in financial aid awards, and how simply rearranging assets can turn a family’s financial profile upside down. Read Part 1 first!

Sometimes people notice a big difference between the estimate from the net price calculator and their final aid award. What would you say causes these vast differences?

User error could be big. They could be filling it out with the wrong year’s information. The initial aid award could have some merit-based aid. The need-based aid is something that you have historical levels of generosity, but there is no telling what they’re going to do in a given year. Those are the types of things that you just can’t, no matter how good your software is, anticipate.

One reader was concerned that even filling out the CSS Profile could reduce the chances of admissions. What are your thoughts on that?

No. Nonsense, it won’t happen.

A parent in Texas wanted to know if a diploma from certain schools will actually help her son get a higher starting salary. What do you think?

That’s why having a specialist in your corner for this stuff is important. It just varies so much. Yes, it can matter. At the company you’re looking at jobs at, did some guy from that company go to the same university? There is a shift away from, “Oh, well, you went to Baylor or this school; you’re hired.” I just think that that’s going away.

If hiring based off of a school’s name brand is going away, what are employers looking at?

It’s more like: Did the student interview well? I’m a huge fan of Steph Curry, and I saw Steph Curry interview Bill Gates. Steph was like, “Bill, let’s pretend you’re interviewing for a job at Microsoft. What makes me want to hire you over like anybody else?” Bill’s like, “Well, look at my code; my code is better than anybody else’s code. What matters to you?” At the end of the day, I think that’s a great question. Who cares if you went to MIT if your code is terrible? What does going to MIT matter if that’s the case?

Great point about performance versus the brand of your institution.

The ironic thing about being a college funding specialist in this space is I do think that our culture is moving away from that traditional four-year degree. There’s still such a huge market for it, and the colleges know that. But I think our culture is one that’s moving more towards a merit-based culture. Shark Tank shows of the world are inspiring a next generation of people that are not leaning so heavily on their laurels and degrees and things like that, and more getting out there and getting after it. That’s a long way of answering her question. I would say it could matter. But it depends wildly.

One reader, a parent, asked if he should be concerned about schools looking into all his assets: retirement, home equity, cars, etc. How do those assets affect financial aid awards?

The college is not going to take anything away. The reality is, though, those things sometimes can be factored into the calculations, which just means that you won’t be awarded quite as much money. And every school counts home equity a little bit differently, like private schools. If they’re worried, there are people out there that can help. That’s how I try to position myself in this process. One of my thesis statements right now, or soapboxes, is that this is just not the year to do this stuff yourself.

Picked for you:  Parents of College Applicants: Three Dos and Don'ts

Will financial aid awards decrease this year at public and private schools due to Covid?

I think financial aid offers across the board will go down. At the right school, it’s actually going up, which again, that’s why working with the student can be really important. We found historically that if the student is in the top 25% of applicants, the school is going to do what they’re going to do to get them there. So overall, yes. I keep close tabs on the industry, on higher education and generally what’s going on. University of Arizona schools, they were asking for federal funding. Georgetown had to furlough employees. Of course offers will go down.

How long do you think decreased financial aid offers will last?

I think it’s a short-term thing. I think eventually it will get back to where it was. There are these small random schools that you’ve never heard of, private schools with enrollments of 3,000 to 5,000 out in the middle of Oklahoma and Nebraska, that had been teeter-tottering for years with budget deficits. This is maybe the thing that puts them out of business, which means again, high-level supply and demand, same number of high schoolers or more graduating, but fewer seats now than ever before. Unfortunately, the cycle continues where they can continue to raise prices, they know they can increase their enrollment, but they’re not going to do that, because they can just charge more for the same seat. And again, I think that’s the trend that’s going to continue.

What’s something we haven’t talked about that’s important to you?

I don’t ever want to “pooh pooh” on financial aid officers and admissions and stuff, but it’s a little bit of a broken system. In a perfect world, I would not have to exist. This niche would not have to exist. But the reality is the majority of our clients are your typical middle-class family, and college is just getting so astronomically expensive that they can’t afford it. A lot of times, I find, as the financial advisor, that they do have the money; it’s just in the wrong places. And so that’s a little bit of the thing as well: trying to help them rearrange their stuff.

Can you elaborate more on what it looks like to “arrange their stuff”?

For one family in particular, they really value that their son or daughter would go to a good school, but we literally had to do a refinance on their house. We had to redirect cash flow from this savings vehicle to that savings vehicle, but that’s what they wanted to do. It literally turned their entire financial balance sheet upside. We did improve their retirement situation, but their stuff before and after we went through the process to make this all happen was a huge transformation.

Last question to follow-up on that: have you seen people successfully hide assets to get more financial aid?

It’s so rare that it actually works. I’m talking like sun, moon, and the stars have to align. What’s more impactful is school selection. You’ve got to watch out in every space. There are bad doctors, bad mechanics, bad everything. That is not our primary goal: We’re not trying to make you look more favorable for financial aid, because it doesn’t always work.

Thank you so much for your time and insights today, Andrew!

Will certain colleges get my kid a better-paying job?
How NOT to appeal for financial aid
What a Denison student learned from working in financial aid