Expert Advice: How to Raise Anti-Racist Teens in a Racist World

“Conversations of race should be normalized. For families, it’s less about the intentionality of: ‘let’s sit down and talk about race,’ but we need to normalize in the way that you see some representation on TV, and you make a comment about it,” says Elaine Kuo, a former Northwestern admissions officer who now works at a California community college. Along with Esther Hurh, national diversity & inclusion trainer and Asian American advocate, the two experts delve into how to parent kids who not only fight against racism, but also stand by Asian Americans — because selective colleges will not risk accepting racist applicants. This week: 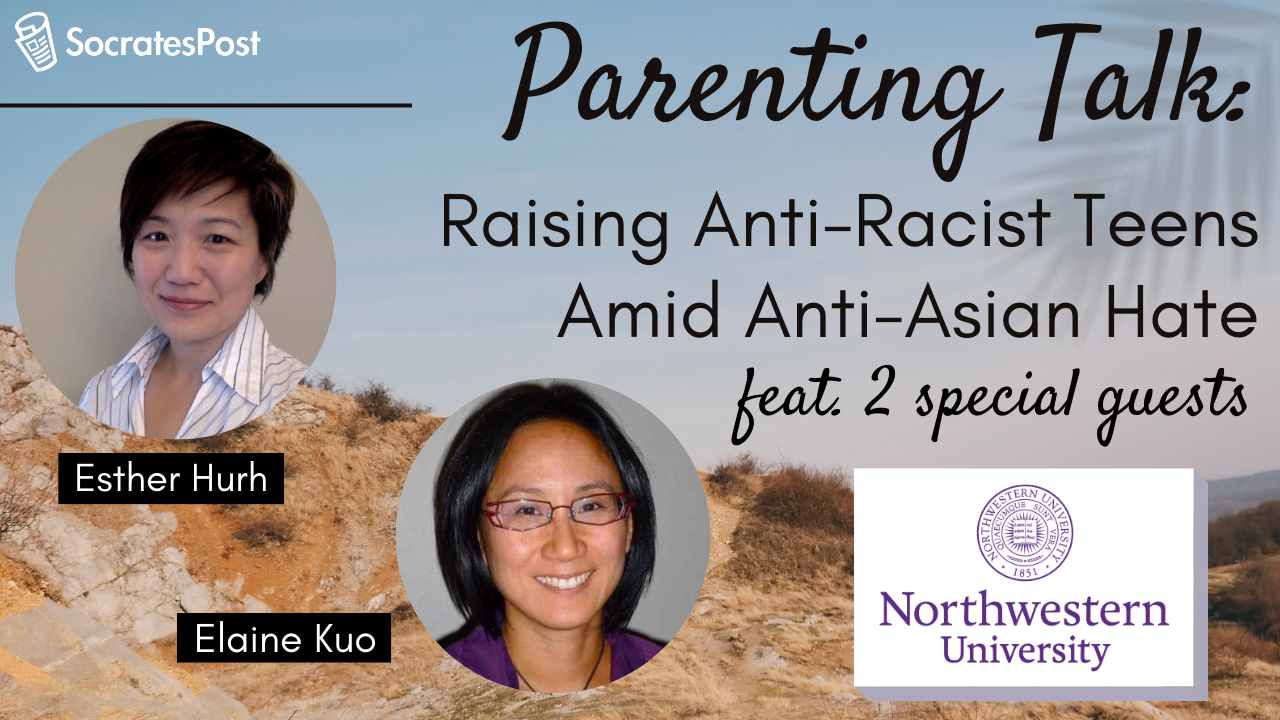 Thank you so much for joining us, Elaine and Esther! Can you share a bit about your background?

Elaine: My name is Elaine, and I used to be an undergrad college admissions officer at Northwestern. I went back to graduate school in higher ed, specifically in higher education. And then I did obtain a PhD in that process. My dissertation was on leadership development among Asian Pacific Americans. I ended my dissertation with: If ultimate leadership development is about notions of citizenship and community engagement, where can college provide those avenues to push that tension? Now I work at a California community college. I do institutional research and planning, but I continue to stay involved in that transition point between high school and college.

Esther: I went to basically a predominantly White private high school when I was growing up in western Pennsylvania. I wasn’t really understanding my racial identity until I went to college at Northwestern, where I majored in political science. Elaine and I were both involved at the forefront of pushing Northwestern to create an Asian American Studies program. We graduated in the year after, and I think it’s because of our strong work that Northwestern was willing — we were successful, they were willing — to implement that. College was certainly a space for real racial awareness and reckoning for me.

Furthermore, I continued my work in this field, generically referred to as DEI work, through my work with the Anti-Defamation League, which is a national civil rights organization, and work both locally in the Chicago area and then also nationally as the National Director of Training and Curriculum. I also got my master’s in human psychology and development at Harvard Graduate School of Education, and now I’m doing consulting work around these topics and also continuing to explore how to include the Asian American voice, the Asian American history, in our K-12 schools, because I wish it didn’t take as long as it took, which was college, for people to grow the in their awareness of Asian American issues.

When talking to their teens about anti-Asian sentiment, how should Asian versus non-Asian parents approach the conversation differently?

Elaine: I think parents need to begin by educating themselves. This is regardless if they’re of Asian ethnicity or ancestry or not. Because as Esther mentioned with that nice segue, for a lot of people it takes until that college space before a lot of these conversations are had, where there’s the space to think about these larger issues, especially ones that center Asian Pacific Americans. Unless the parents themselves have had sort of this background, there’s a lot that they need to do themselves first before engaging in this conversation.

Esther: We want the conversation to not to reinforce current narratives, but to begin to challenge the dominant narratives that unfortunately work against the Asian American community. For either racial identified parent, whether Asian American or non-Asian American, the first thing that I would want them to think about is: What are the fundamental values that they want their children to really embrace? Be explicit about that. I think we just assume that our teens know, and I think that’s wishful thinking. So be explicit about what our value systems are, and then from there, talk about the kinds of behaviors that we would like to see. For those who have an Asian American identity, use their own experiences, about how it felt, because we want to validate feelings. We don’t want our young adults to think, “This is only happening to me, so it must be just me,” as opposed to their experience being impacted because of the context around them due to assumptions and stereotypes around Asian Americans. Being able to share those stories creates a sense of understanding and a different kind of framework to understanding their experiences.

What about for families who are not Asisan American?

Esther: While they may not have the experience themselves because they’re not Asian American, they probably have been witnesses to that experience. They should share situations where they’ve seen this or have heard this and say: “I wish I had done this,” activating an exploration of choices of behavior. Because silence and looking away is a form of action, and that is just as problematic.

How should I get my social media ready for college apps?
College Decisions 2021: How to Manage Uncertainty and Anxiety
Top Admits: Hananeel Morinville, Vanderbilt University