Rare Job Profiles: An original series published intermittently that profiles individuals with jobs that make us go “What do these people actually do behind the scenes?” As parents, counselors, or college applicants, we know a lot about careers we’ve encountered, but not much about what other people do. The college journey is all about self-discovery — including exploration of professions we never knew existed. We hope this series shows you the real colorfulness in the world, inspires your imagination, and, as per our forte, sneaks you some insider tips on getting your foot in the door. See past profiles here.

“If a young person is interested in law enforcement, if they want to make a difference and help people, then yes, by all means go into policing. But it’s going to be in a different manner. People are not happy when you take them to jail. You are reinforcing consequences,“ says Dr. Mari Kong, a USC criminal justice professor and 19-year veteran of the San Diego Police Department. This week, the retired patrol officer gives students and parents a rare peek into the law enforcement career, especially as a woman of color. 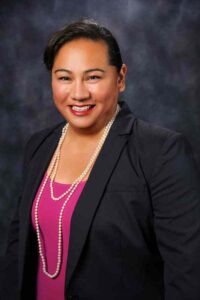 Dr. Kong, thanks so much for joining us. What are you an expert in?

I would say that I’m an expert in police culture and structural inequality in the institution of policing.

Our series highlights unique career options. Can you sum up your career in law enforcement?

I did 19 years with the San Diego Police Department. And so if I were to tell someone what my career is like, I did 15-16 years in patrol. This is where I met people at the worst moments of their life. People call the police because they don’t know where else to turn.

What’s something that might surprise students about your job?

When I write police reports I am documenting their story in that moment. A lot of people don’t know that cops write about 85% of their time. And then me in the organization, in the bureaucracy, that is where I struggled. I had a really hard time because I wasn’t the in-the-box kind of cop. I made it a point to really not let the job take over my life, and so I kept the balance. Being a police officer wasn’t my end-all be-all. So I think I was resented a lot. It’s a really hard culture.

What was so challenging about the policing work culture?

I’m Mexican, Japanese, and Chinese. My last name is Chinese, but I identify more with the Mexican side. That’s why my dissertation was on Latina police officers. The culture of policing: It’s a very white male-dominated culture. They’re the ones who set the standards, the norms, the rules; they determine what is accepted and what’s not accepted. So early on in my career, I understood that you need to be that proactive cop that makes a lot of arrests and takes bad people off the streets. I did not find any pleasure in that. I was truly about helping people and making a difference. The officer just uses that arrest to make himself look good, so it just sustains and continually builds that crimefighter image.

I really struggled with that my whole career. As a woman of color and even just as a woman, a white woman, it’s a major shock when you get into policing. As a woman of color, I knew I had to work twice as hard and be twice as smart, prove that I’m strong every single day to my male coworkers. It is tough as a woman. Sexism is still very much strong in policing today.

Many of our younger readers might be wondering how you were able to commit for 19 years despite knowing you had to work twice as hard and be twice as smart?

I probably didn’t even know it. It’s so insidious. It’s so covert, you don’t know that you’re working twice as hard as the men. You don’t know that constantly you’re feeling, “I’m not smart enough. I’m not good enough.” It’s just something you deal with every day. Because if you did know that, would you stay for 19 years? No, it’s exhausting. It was working with the public and just really reaching people where I could reach them: that’s what really kept me in the profession for so long.

How did you ultimately figure out that you were working harder yet getting treated worse than your colleagues?

After three or four years in patrol, I was like, “Man, I’m bored. There’s got to be something else.” And so I went back to school, and I got my master’s degree. I was able to get into Fielding Graduate University and I got another Master’s and PhD. And so they say, with education, the more you learn, the more you know, I can guarantee you that there are women in the police department all over the United States who say, “I am treated just the same as my male coworkers; I don’t see a difference.” If you look at the philosophy of legitimacy, the theory of justification, it talks about how these structural inequalities are so prevalent in the culture.

What type of personality is suited for the job of policing?

The younger generation is really interested in finding jobs that give them purpose. Policing, in an aspect, is giving you a purpose, right? I am working for society to create a greater good. Now, the institution of policing is a whole different environment. No matter how I feel on an issue, I always have to know that I am defending the law, or the law is what gives me authority to be here. So I can’t infuse my own beliefs into something.

If a young person is interested in law enforcement, if they want to make a difference and help people, then yes, by all means go into policing. But it’s going to be in a different manner. People are not happy when you take them to jail. You are reinforcing consequences. There are consequences for bad behavior. If you speed, if you beat your partner, if you get in a fight and hit someone with a pipe or something, there are consequences, and you’re taking care of those consequences. So if that’s something that interests you, then yes, go into law enforcement.

For our younger readers, what is the requisite education to be a police officer or detective?

I told my students at USC that, please remember, the requirements to become a police officer are 20 and a half years old, a high school education, and be a U.S. citizen. They’re very low. Policing typically has been thought of as a blue-collar job. You don’t need a college degree to do policing.

You said that being a good police officer requires street smarts, not just education. What do you consider street smarts?

Street smarts can also be known as common sense. Don’t leave your friends alone if they’re drunk; they could get robbed of their phone and beat down. Another thing is how to be resourceful. If I am left by myself, how do I know how I’m going to get help? Or how am I going to get myself out of this situation? When someone calls the police, it’s very important that you know your location.

What’s another example of common sense? Just reading people. If someone comes up to you to ask for help and they obviously look like something’s wrong, you don’t have to help them. It’s okay to say no to people. And there’s always strength in numbers. But just don’t be alone or leave your friends alone.

I always figured out how to do things myself rather than waiting for someone to do something. Just figure it out for yourself and then do it. Don’t just wait on others to help you. Use your brain, your critical thinking.

Without a college degree, though, can candidates be competitive, even if they’re not required?

More and more police departments are requiring a bachelor’s degree, or you can be in the military. But I would tell the high school students to not get a degree in criminal justice, because it does limit you to policing or law enforcement or something in the criminal justice field.

For parents or for high school students, if you’re thinking about a career in policing, I know a lot of young high school kids are very interested in forensics. Forensics is all science. You need that chemistry degree; you need that Bachelor of Science.